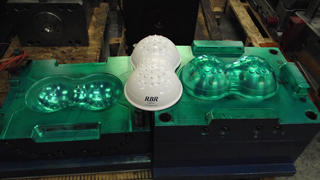 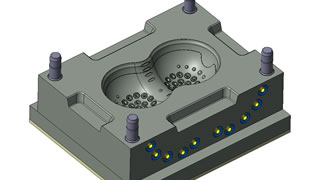 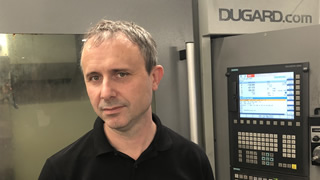 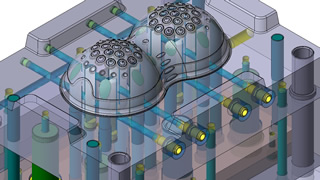 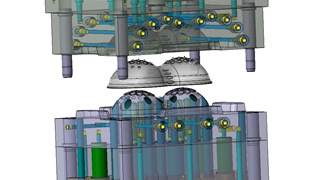 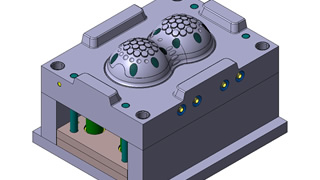 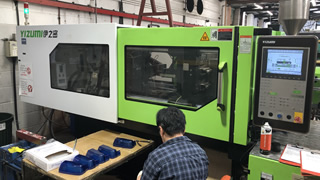 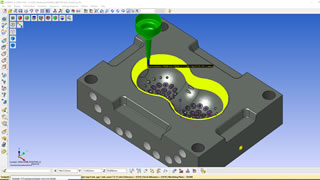 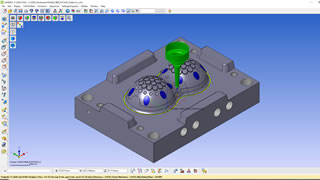 A toolmaker and injection molder was tasked with developing a potentially life-saving medical device; and then designing and machining a complex steel mold tool with around 30 components, to produce it.

"VISI’s mold package and its built-in catalogues of mold tool suppliers such as Meusburger and HASCO, were critical at the design stage, while WORKNC’s surface finishing and its ability to program small cutters with precise, flawless, toolpaths, were critical to the manufacturing."

A toolmaker and injection molder was tasked with developing a potentially life-saving medical device; and then designing and machining a complex steel mold tool with around 30 components, to produce it.

Fenton Precision Engineering worked with RBR ActiveTM on a device to reduce the possibility of suffering a deep vein thrombosis (DVT). Carrying out three simple foot exercizes with it leads to an 11-fold increase in blood flow to the lower limbs.

Injection molded from Polypropylene on a 120-tonne Yizumi press, the RBR LegflowTM device is said to be effective anywhere during long periods of inactivity such as air travel, working in an office, being in hospital, or just through prolonged sitting.

The mold tool for it was designed in VISI, and cut from P20 tool steel on a Dugard CNC machine programmed with WORKNC – both software solutions from Hexagon Manufacturing Intelligence’s Production Software business.

When RBR ActiveTM’s Managing Director, Paul Westerman, approached Fenton, it was to ask if they could produce a mold tool for the overmolded concept. “We suggested it would be better to mold it as a one-piece product,” says Richard Brown, Fenton’s Technical Director. “VISI’s reverse engineering capability was essential, to take the point data from our CMM and combine surfaces and solids, and seamlessly work between the two.”

The wall section at the top of two dome structures on the product, which contains 38 nodules, had to be particularly thin to allow flexibility. “But there’s obviously a limit as to how thin we could make the wall. We got the optimum thickness through VISI Flow Lite, which simulates the filling phase of the injection molding process. Design Engineer Martin Edwards defined all the initial molding criteria and gating positions with it, to achieve a well-balanced filling of the cavities under optimum manufacturing conditions.

“Once he was happy with that, we had 3D prints of the product made, and after a few minor design changes, Paul Westerman signed it off, and we constructed the tool around it using VISI Mold, with its built-in Meusburger catalogue for the native parts.”

Richard Brown says that because of the radius shape, the CAD room decided that holes for the eight ejector pins should be produced using their wire eroder after the main surface had been machined on the Dugard. Both sets of toolpaths were generated in WORKNC.

He describes the mold tool as being “straight open and close,” with two cavity plates, support plates, and back plates, comprising around 30 different components. “One of the design challenges was to ensure there were no side actions or lifters.”

The complete tool manufacture took around six weeks; the cores and cavities were machined through WORKNC, with each plate taking around 25 hours, and a further 20 hours for the build. “It was quite a complex format, with a lot of small solid carbide cutters from a variety of suppliers. We also used shrink fit tooling to ensure grater accuracy, balanced chip loads, better finishes, and increased speed and feed rates.” And he says WORKNC’s ability to produce high quality surface finishing kept any additional polishing to a minimum.

The full timeline for the overall project was around 11 months:

On Fenton’s recommendation, SteriTouch antimicrobial masterbatches were added, to protect the product against bacteria, biofilm, fungi and mold, for its entire lifetime.

While the extensive range of functionality in both VISI and WORKNC combined to ensure the project was completed successfully, he says VISI’s mold package and its built-in catalogues of mold tool suppliers such as Meusburger and HASCO, were critical at the design stage, while WORKNC’s surface finishing and its ability to program small cutters with precise, flawless, toolpaths, were critical to the manufacturing.

They design all their mold tools in VISI and machine them on one of their six 3-axis Dugard, Mazak and Mikron CNC mills. “WORKNC readily reads native VISI files, so it’s a seamless transition from CAD to CAM. Once we save the VISI workfile we simply open it in WORKNC.”

As well as working with the medical industry, Fenton Precision Engineering also provides products for many other trades, including the building sector, internal engine parts, healthcare and interior automotive product, along with cosmetic components for a variety of white goods, packaging and retail customers.

Their tool room and main molding facility are in Northamptonshire, with an additional molding factory in Leicestershire, where the RBR LegflowTM was dual pad printed. They have a total of 33 molding machines across both sites, having invested heavily in Yizumi injection presses, along with Negri Bossi, Arburg, Borche and Demag, ranging from 25 tonnes to 500 tonnes.