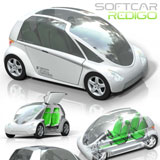 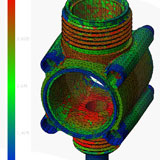 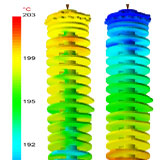 Located next to Lake Bienne on the French - Swiss border, Domteknika SA is a service company providing technical and strategic assistance to world leaders in the automotive, household appliance, packaging and other design industries.

Formed in 1999 by Jean-Luc Thuliez, the company is actively interested and heavily involved in improving design and production methods to benefit the environment and minimize ecological impact. Specifically they have researched the impact in design to cost analysis, tooling, plastics & polymers engineering and prototyping through their Research & Development group.

"With the help of VISI Flow, we are working three times faster than our competitors - and with a major technical advantage.”

One such project was an eco-friendly car that not only produced zero emissions but equally as important, was also recyclable with minimal environmental impact.

Working on a project commissioned by the Poitou Charente region, Domteknika worked in partnership with DiedreDesign and Induct to create the REDIGO-SOFTCAR, an eco-friendly car both in terms of pollution, manufacturing and recycling. After much interest at the recent Mondial de l'automobile show, it is hoped the car will soon be in production.

Recycling
"The REDIGO-SOFTCAR certainly fulfils the criteria of the eco-concept vehicle originally presented to us", explains Jean-Luc Thuliez. "The concept of zero emission vehicles is an important topic and one that is high on the agenda for many automotive companies. However, for this project, the tailpipe pollution was not the only ecological constraint taken into account. The objective of the project was to produce a car where the benefit to the environment was split between the reduction in carbon emissions and the eventual recycling of the vehicle. Other fundamentals of the project included the classic research for manufacturers to reduce costs, and the increasing demands of emerging markets to launch very low-cost vehicles. However, the batteries for fuel-cell vehicles are still very expensive and will represent a significant part of the cost for some years to come."

While continuing to protect the planet, Domteknika also develop the Angel Interceptor, an 'electric monster' with extraordinary acceleration and a top speed approaching 260 kph.

Reduction of material use
Domteknika placed major emphasis on dramatically reducing of the number of materials used in the construction of the eco-friendly REDIGO-SOFTCAR. The largest reduction could be found in the number of thermoplastic polymers used.

A simple examination of the dashboard from a typical vehicle highlights the number of different polymers used during production. The dismantling of individual pieces and the sorting of materials for recycling can be long and expensive process. It doesn't make sense to produce a zero emission car if the manufacturing and recycling costs are too high, diluting the environmental benefits.

"It is an original exercize," explains Jean-Luc Thuliez. "No study has been pushed so far in a vehicle design based on such a criteria. However, to reach the goal, it was necessary for us to guarantee that the design of components and their production were also fully optimized. We not only had to analyse the geometry but also the simulation of the plastic injection process".

The procedure of correctly predicting component or molding failures is vital, especially for passenger safety. Head impact is a major issue for the automotive industry and an example of how model analysis can be so valuable would be in the area surrounding airbag deployment. Industry requirements ensure that no weld lines can be present on the plastic molding within 50mm of airbag deployment because these indicate weak stress points that may fail under crash testing - the result would be plastic shards around the passenger space. If this single component fails a crash test, the result is new CAD models and a new suite of tooling.
Already equipped with 3D CAD technology, Domteknika made several bench mark tests on software solutions for plastic injection simulation. After extensive testing, and following advice from plastics technology expert, Yves Lozach, Domteknika purchased VISI Flow from Vero Software in December 2008.

VISI Flow - Three times faster
Although relatively new to plastic injection simulation, the assessment of VISI Flow is already positive for Jean-Luc Thuliez: "The advice, training and support has been excellent from both the Vero team and Afcoplast (www.afcoplast.com). We have learnt not only how to use the software, but have also began to understand how molding parameters and mold & part design influence the failure of injection molded plastic parts. The software has proved itself to be fast, accurate, and most importantly, very complete. We currently use all VISI Flow options because it is essential for us to ensure that our design choices are compatible with the materials being used within the optimal molding conditions. We often have to test different thermoplastic solutions, so the setup and calculation times of VISI Flow are a big advantage as they do not add major delays to our development time. After the results of the plastic simulation, we often have to make changes to the CAD models to compensate for molding issues. VISI Flow allows us to predict potential manufacturing problems with devilish precision allowing the maximum possible time frame for a corrective solution."

Etienne Crozier, Development Engineer at Domteknika further explains the benefits of plastic injection simulation. "In plastics processing industry, we are often in the habit of trying to put ourselves into the material to better understand what takes place during molding and how the material reacts under pressure. With the help of VISI Flow, we can now give a clear and ultra-precise analysis to the mold maker. We can even guarantee the results with the selected polymer."

VISI Flow is being used to maximum capacity by the team at Domteknika - from filling simulation, through warpage, weld line & air trap detection and ultimately to determine the optimal gating position.

Jean-Luc Thuliez concludes, "With the help of VISI Flow, we are working three times faster than our competitors - and with a major technical advantage."

"With the help of VISI Flow, we are working three times faster than our competitors - and with a major technical advantage.”