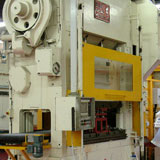 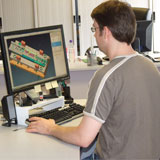 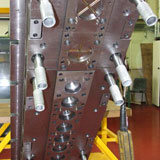 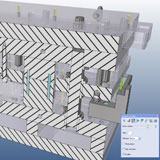 Press ahead with software automation

Established in 2005 by brothers Declan and Brendan Ward, Irish Pressings, based in Gweedore, Co. Donegal have over 30 years experience in research & development, tool manufacture and project management in the automotive field, working with industry giants such as Ford, GM, Toyota and BMW.

"Before the introduction of VISI, a large die, including tool build would take approximately 8-10 weeks. The first tool designed with VISI was complete and signed off in less than 4 weeks. There is no doubt that the software has given us a competitive edge.”

“One of our major objectives was to try and improve the lifecycle time for an entire project without a reduction in quality. All of our tooling is designed and built in-house which allows us to maintain a full level of control and react immediately to customer requirements” states Managing Director, Declan Ward.

Recent investments to upgrade the toolroom have seen the commission of a Bridgeport VMC 1000, HAAS (VOFE) machining center, Fanuc Alpha EDM machine and an ABB plasma robot welder. “The toolroom is now very efficient” claims Declan, “but we also needed to update our design office – we simply could not keep up with the increasing requirements of the toolroom.”

After using a mixture of traditional CAD and CAM systems, Irish Pressings decided to search the market for software more aligned to the tool & die industry and one which would automate some of their most repetitive tasks. After extensive research and benchmark tests Irish Pressings selected VISI Progress and VISI Machining from Vero Software. VISI Progress is a dedicated application for the design of 3D progressive die tools with different possibilities for the definition of the neutral fibre and the step by step development of the blank. Once the strip design is complete, the shearing and bending stages can be simulated to prove the function of the tool. The 3D tool is constructed using solid and surface technology combined with intelligent standard library components which include all clearance holes and CAM attributes for automatic plate machining.

“Our previous CAD & CAM systems were too generic and a little too cumbersome for tool design” explains Damien Boyle, chief design engineer for Irish Pressings. “For a complex tool build, we were always worried that mistakes could creep in. If a plate has to be removed from a tool for modification because of a design fault, this could take as much time as the plate programming itself.”

The benefits of VISI were highlighted in the very first tool designed using the software. The die was a 3 stage tool for an automotive suspension component. “We were able to construct and visualize the 3D strip in less than 30 minutes” explains Damien. “Being able to view the die in 3D is a huge help and removes the mystery of trying to unravel a 2D drawing in your head. The flexibility of the software allowed us to simply drag and drop the punches within the strip layout and view the effect on the die.”

The greatest time saving was found in the toolroom when using MFR (machining feature recognition) for automatic plate machining. “Instead of providing detailed drawings, we simply issue a 3D model and let the CAM system detect the drilling features. On the first tool, our analysis shows that the CAM programming time has been reduced by more than 60%. Machining time for a multi-stage die used to take approximately 6-8 weeks. However, when using VISI, it was less than two weeks.” explains Brendan Ward, Production Manager.

6 days of basic and advanced VISI training, initially provided by Irish reseller Elon Designs (Co. Sligo) and later by Vero directly were sufficient for the designers at Irish pressings. “After their initial training, the designers were already competent when working with VISI” confirms Brendan. “We are still learning the product and the support has been fantastic. If we are ever stuck, the engineers at Vero are quick to use Webex and take control of our system and show us how to overcome our issues.”

Declan concludes by making a comparison against a recently produced tool of similar size and complexity for BMW. “Before the introduction of VISI, a large die, including tool build would take approximately 8-10 weeks. The first tool designed with VISI was complete and signed off in less than 4 weeks. There is no doubt that the software has given us a competitive edge.”

Since the initial introduction of VISI, Irish Pressings have already added an extra design seat and employed an extra tool designer and apprentice toolmaker to keep up with the increased workload and extra demands.

If the successful integration of software automation is not evidence enough that Irish Pressings are an innovative and forward thinking company, the installation of a highly efficient HERLT wood-burning boiler shows a commitment to the environment that matches their commitment to local industry. The boiler provides heat and hot water for the building and acts as an efficient means of disposing of waste wooden pallets. As a result, heating bills have been reduced by more than 750% and Irish Pressings continue to save on the cost of disposing of wooden pallets.

"Before the introduction of VISI, a large die, including tool build would take approximately 8-10 weeks. The first tool designed with VISI was complete and signed off in less than 4 weeks. There is no doubt that the software has given us a competitive edge.”