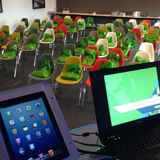 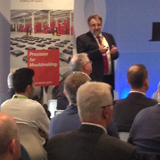 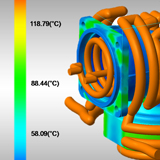 Conformal cooling, and the role of 3D printing, were major topics at Vero Software’s recent educational innovation event for the injection molding industry.

Around 75 mold and tool makers attended the seminar at the UK headquarters of SECO Tools, which focused on bringing the industry’s cutting edge technologies together, driving efficiencies in tool production and finished part creation.

As part of the tool construction process, the VISI CAD/CAM solution can be used to design cooling channels for conformal cooling which wouldn’t be possible with conventional methods.

The keynote speaker at the event, Graham Tromans, President of rapid prototyping and additive consultants G.P. Tromans Associates, explained how 3D printing plays a growing role in many industrial applications, and is forecast to be worth $21-billion by 2020.

“It is fast becoming a worldwide phenomenon, and is currently used extensively in the automotive, aerospace and medical sectors.” He cited 3D printed examples of aircraft fuel nozzles and hinges, a thrust chamber assembly for NASA; dental crowns, artificial skin and prosthetics implants; along with tools, molds, jigs and fixtures.

“3D printing will have a tremendous impact on low volumes. At the moment it’s hard to justify the cost of customizing tools for low volumes, especially if you only need four or five parts, or a one-off. But this technology makes it cost effective to produce small quantities, including prototypes and samples which make it easier for the customer to decide, resulting in less cost implications if modifications are required.”

He says it will also have an effect on the high volume sector of the mold making industry, with 3D printed inserts for injection molded tools. “The inserts can be 3D printed extremely quickly, giving tool makers the opportunity to create different models of the same part and carry out modifications before committing to production tooling.”

This point was extended by Neil Moseley, Managing Director of Hasco UK, who said ever shorter time-to-market and increased product variants in low volumes, call for prototypes that can be produced rapidly and cost effectively. He said although Hasco don’t supply 3D printed products themselves, they used the technology to create mold inserts on a recent project where they needed to further develop an existing part, resulting in a molded part which was ready for testing in four days.

“3D printed mold inserts for the production of injection molded components are definitely the way forward for small batch prototypes. It’s a very good way of developing products in a quick time scale and creating products that are fit for purpose for field testing, and even production parts.”

Martin Hamill, Sales Manager of SYS UK, gave an overview of applications where 3D printing can improve short run injection molding and prototype tooling.  “This is a critical part of the whole process. It’s allowing UK companies to move forward a lot quicker and compete with companies across the world.

“Events like this are extremely important for mold makers, highlighting the technology, and showing that it’s happening now.” He explained how 3D printing is reducing the time to have a prototype ready for testing by up to 70 per cent, highlighting case studies from Robert Seuffer GmbH and Milacron, who both said 3D printed tools made it much easier to achieve their goals, and helps their customers get products to market considerably faster.

The General Manager of Romi UK, Marcel Machado, reviewed the status of the UK mold making industry, and explained how plastic injection molding machines are adapting to market needs.

Vero Software is part of Hexagon (Nordic exchange: HEXA B), a leading provider of design, measurement and visualization technologies. Product Line Specialist Jamie Barnett showed a Romer Absolute Arm, which has a HPL20.8 laser scanner, and is used for the ultra-fast inspection of mold tools. The presentation focussed on how a model scan of more than 12 million points can be quickly converted to a fully repaired CAD model using 3DReshaper.

The event concluded with a look at how CNC machines of the future may have an “undo” function, courtesy of 3D printing. Peter Coates, of Hybrid Manufacturing Technologies, showed examples of where CNC machine tools were retrofitted with a laser cladding tool changer. “This means we can add small amounts of material to relatively large substrates, machined to a high quality finish. For example, adding an inconel flange to a stainless steel shaft; repairing a damaged mold cavity by machining away the damaged material and 3D printing it back to a useable condition.